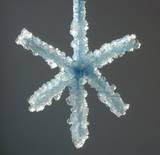 So every year I always like to sit down with the kids and make new ornaments for our tree. This year I got on the internet and found this cool idea about how to grow Borax crystal snowflakes. Obviously with my younger I will be doing more of the work but I knew that my daughter would love this and she did :)
Here is how they are made & What You Need:
The first step of making borax crystal snowflakes is to make the snowflake shape. Cut a pipe cleaner into three equal sections.
Twist the sections together at their centers to form a six-sided snowflake shape. Don't worry if an end isn't even, just trim to get the desired shape. The snowflake should fit inside the jar.
Tie the string to the end of one of the snowflake arms. Tie the other end of the string to the pencil. You want the length to be such that the pencil hangs the snowflake into the jar.
Fill the widemouthed pint jar with boiling water.
Add borax one tablespoon at a time to the boiling water, stirring to dissolve after each addition. The amount used is 3 tablespoons borax per cup of water. It is okay if some undissolved borax settles to the bottom of the jar.
If desired, you may tint the mixture with food color.
Hang the pipe cleaner snowflake into the jar so that the pencil rests on top of the jar and the snowflake is completely covered with liquid and hangs freely (not touching the bottom of the jar).
Allow the jar to sit in an undisturbed location overnight.
Look at the pretty crystals!!! You can hang your snowflake on your Christmas tree or as a decoration or in a window to catch the sunlight :-)
Tips:
Borax is available at grocery stores in the laundry soap section, such as 20 Mule Team Borax Laundry Booster. Do not use Boraxo soap.
Because boiling water is used and because borax isn't intended for eating, adult supervision is recommended for this project.
If you can't find borax, you can use sugar or salt (may take longer to grow the crystals, so be patient). Add sugar or salt to the boiling water until it stops dissolving. Ideally you want no crystals at the bottom of the jar
Happy Holidays Everyone!
Posted by Unknown at 12:44 AM