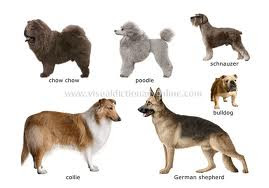 Animals
My kids love learning about them. So I decided that we would learned about dogs this week .

My kids were surprised to learn that dogs can have jobs too.

We found out that the average life span for a dog is around 10 to 14 years and that there is said to be around 400 million dogs in the world and that the domestic dog has been one of the most popular working and companion animals throughout human history.

~>so they are used for more then just belly rubs lol ;-)

Also dogs perform many useful tasks for humans including hunting, farm work and security as well as assisting those with disabilities such as the blind.

This my kids thought was the coolest!

We also learned in our research that dogs have superior hearing than humans, capable of hearing sounds at four times the distance and that dogs have a remarkable sense of smell, they are capable of differentiating odors in concentrations nearly 100 million times lower than humans can.

So as you can imagine my kids have been begging for a family dog now
Woof! did I get myself into LOL! :-)

Email ThisBlogThis!Share to TwitterShare to FacebookShare to Pinterest
Labels: dogs